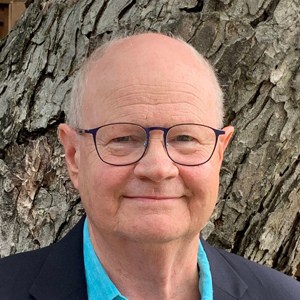 A native of Dallas, George Baker won the AGO National Competition in Organ Playing in 1970. After SMU, he went to Paris to study organ and improvisation as well as to record. He returned to America to teach organ, then entered medical school. Although he obtained his M.D. and became a dermatologist, Dr. Baker never ceased performing, composing, teaching, and recording.

George Baker received training with some of the finest organ teachers, including Robert Anderson (SMU), Marie-Claire Alain, Pierre Cochereau, Jean Langlais and André Marchal, these last four in Paris.  During his time in France, Baker earned the Prix de Virtuosité with Mention Maximum from the Schola Cantorum, under Langlais. He earned his DMA at the University of Michigan.

George Baker won first prizes by unanimous jury decisions in several major organ competitions including the American Guild of Organists (Buffalo, 1970), the Grand Prix de Chartres (Chartres, France, 1974) and the International Improvisation Competition (Lyon, France, 1979).  His recording credits include the complete organ works of J. S. Bach and the complete organ works of Louis Vierne, among many others. He has been awarded three French Grand Prix du Disque.