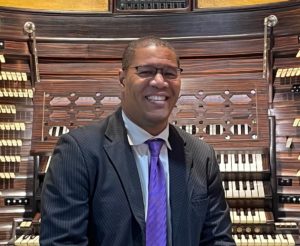 Tedde Gibson is a pianist and classical, Hammond, and theatre organist. He is also a composer, arranger, and silent film scorer. Born in Tacoma, WA, he began organ study at age 16 with the late AGO president Dr. Edward Hansen of the University of Puget Sound. He later studied classical organ improvisation with David Dahl, professor emeritus of Pacific Lutheran University. Tedde studied theatre organ arranging with Jonas Nordwall of Portland, OR. He was a regular organist at Tacoma Pizza and Pipes from 1995 until the restaurant’s demise in 1999. Tedde was an organist at Tacoma First Assembly of God/Life Center. Upon moving to Seattle in 1996, he studied with Dr. Carol Terry and Dr. J. Melvin Butler of the University of Washington. He was then organist at First AME Church Seattle.

Tedde is an active recitalist and workshop clinician, performing on theatre and church organs across the country, and has recently accompanied “Sex and the City” alum Mario Cantone in the PBS production of “Wicked in Concert”, broadcast nationally.

Tedde became a director for the American Theatre Organ Society in 1997, Vice Chairman of the Board in 1998, and Chairman in 2021.