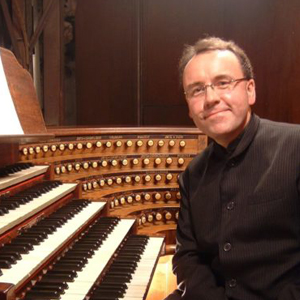 “A phenomenon without equal in the history of the C20th French organ”.  Such was Marcel Dupré’s commendation of his student Pierre Cochereau, who held the post of Titulaire des Grandes Orgues de Notre-Dame de Paris from 1955 until his premature death in 1984, aged only 59. In this illustrated lecture, David Briggs reveals the secrets behind Cochereau’s greatness as an improviser, performer, and educator, focussing particularly on his transcriptions of many of Cochereau’s most famous improvisations from Notre-Dame. David gives an in-depth survey of his most recent Cochereau project, undertaken during a lockdown:

I’ve been on the Cochereau forensic trail again, after a 20-year gap. 1962 Assumption improvisations – absolutely beautiful, and created in the last months of the 1862 Cavaillé-Coll console. PC absolutely ‘on fire’, aged only 38. I have the original reel-to-reels (in mono), given me some years ago by Fred Tulan, a well-known Californian organist and great friend of PC, who was in the tribune. Same procedure as 20 years ago (about 4 hours to transcribe one minute’s music) except now we have the extremely useful tempo adjust facility on Garageband, which means you can listen at 10% of the original speed, but at the same pitch. That means there is no excuse for getting anything wrong! These improvisations are like gold dust – so beautiful, so inspiring, so energized.