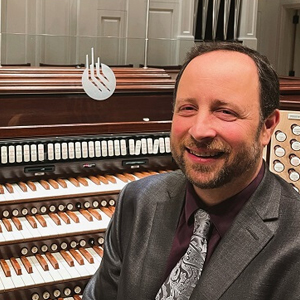 Growing up in Attleboro, Massachusetts as a part of a musical family, Chris was introduced to classical music from his earliest days, falling in love with the music of Bach as a young child. This affinity for Bach naturally led to the organ, and to a strong curiosity about its construction. Herbert Norman’s ‘The Organ Today’, led Chris, at the age of 11, to make organ building his career.

Chris started piano lessons in the third grade and organ in the ninth, studying organ throughout high school. He majored in music at Bridgewater College in Virginia’s Shenandoah Valley, which led directly to a job at Taylor and Boody Organbuilders in Staunton starting in 1988.

Chris also does independent organ maintenance work, which has given him significant experience with such esoteric matters as equal temperament, pitman windchests, and even high-pressure pipework (above 4 inches!), among other things. A wide range of clients and organ types, including working with other firms such as Buzard Pipe Organ Builders and Orgues Létourneau, has given him a broad base of knowledge.