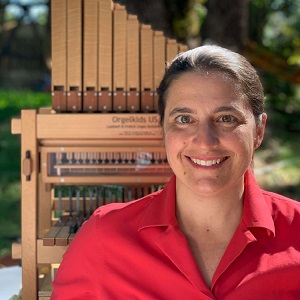 Erin Scheessele (rhymes with Nestlé or Presley) founded Orgelkids USA and has served as its volunteer director since 2016. She studied biology at Duke University and earned her doctorate in ecology at Oregon State University, investigating amphibian declines. Erin has taught at Duke University, Oregon State University, and Willamette University. She made the jump from frogs to pipe organs after she decided to take a break from academia to raise her two sons, the eldest of whom became enamored with pipe organs at age two. The Scheessele family undertook to launch Orgelkids USA, an extension of the original Orgelkids program in the Netherlands, as a family project with all four family members contributing and learning new skills along the way. Exploring its capabilities and helping grow the availability of Orgelkids kits in the United States has taken the Scheessele family to Maker Faires in Seattle and Portland, Oregon, AGO conventions in Salt Lake City, and Montreal, Canada, as well as workshops in Haarlem, Netherlands, and Taiwan. Their adventures with Orgelkids have been published in TAO and Vox Humana. From her work in the field of conservation biology, Erin recognized one of conservation’s tenets in the motivation underlying Orgelkids: “In the end, we will conserve only what we love, we will love only what we understand, and we will understand only what we are taught,” Baba Dioum (1968). Erin and her family continue to witness how the Orgelkids kit can be a potent first step in inspiring passion for the pipe organ.