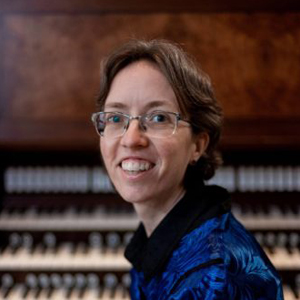 With playing described as having “bracing virtuosity” (Chicago Classical Review) and being “fearless and extraordinary” (Amarillo-Globe News), organist Isabelle Demers has enraptured critics, presenters, and audience members around the globe for her entrancing performances. Her 2010 recital for the joint International Society of Organbuilders-American Institute of Organbuilders convention so enchanted the audience that she “left the entire congress in an atmosphere of ‘Demers fever’.” That same year, her national convention of the American Guild of Organists, in Washington, D.C., was received with great acclaim not only by critics, who deemed it “one of the most outstanding events of the convention” (The American Organist), but also by the standing-room-only audience, which called her back to the stage five times.

Ms. Demers is in continual demand by her fellow colleagues as witnessed by repeat performances for regional and national conventions of the American Guild of Organists (Minneapolis, 2008; Washington D.C., 2010; Hartford, 2013; Austin, 2013; Indianapolis, 2015; Houston, 2016), the joint convention of the American Institute of Organ Builders and International Society of Organbuilders (Montréal, 2010), the Royal Canadian College of Organists (Toronto, 2009; Kingston, Ontario, 2016), and the Organ Historical Society (Vermont, 2013 and Minnesota, 2017).

Her debut recording on Acis label was met with critical acclaim. On a recent broadcast of Pipedreams, radio host Michael Barone featured the Fugue from Reger’s Op. 73, describing it as “a masterful score, here masterfully played,” and Isabelle Demers as, “definitely a talent to watch, to hear”. The RSCM’s Church Music Quarterly awarded the “exciting, expressive and successful” recording its highest recommendation for its “profound and searching” performances. Fanfare Magazine proclaimed the “superbly produced” and “clear, tightly focused” recording as a “brilliantly played program.” Her second disc, featuring the organ works of Rachel Laurin, was released in June 2011, and her recording of Max Reger’s Seven Chorale-Fantasias in November 2012. Her fourth CD, Bach, Bull, and Bombardes (Pro Organo), was released in May 2013, and includes works of Bach, Bull, Reger, Widor, Tremblay, Mendelssohn, Daveluy, and Thalben-Ball. She also appears as solo organ accompanist in a recording of Maurice Duruflé’s Requiem with the Baylor University Choir, recorded at Duruflé’s church, St. Étienne-du-Mont, in Paris. Her latest CD, recorded at Chicago’s Rockefeller Chapel, was released in January 2020, and includes works of Reger, Laurin, Dupré, Mendelssohn, Tchaikovsky, and Macmillan.

A native of Québec and a doctoral graduate of the Juilliard School, Dr. Demers is the Joyce Bowden Chair in Organ and Head of the Organ Program at Baylor University in Texas.