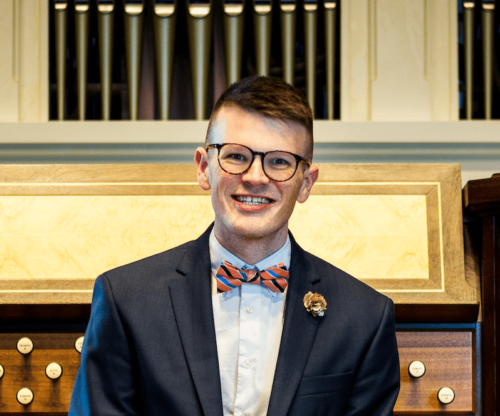 Hailed by The Baltimore Sun as a “rising organ star,” Jordan Prescott has established himself as one of the leading organists, conductors, and scholars of his generation. A native of Greenville, North Carolina, Jordan holds the Bachelor of Music in Organ and Sacred Music from East Carolina University. While at East Carolina, he spent two years as Organ Scholar of Duke University Chapel in Durham. Following this appointment, Jordan held a similar position at Emmanuel Episcopal Church in Baltimore. He now serves as Organist-Choirmaster at Grace and St. Peter’s Episcopal Church in Baltimore, where he conducts over fifty choral services each year. In 2019, Jordan was graduated cum laude with the Master of Music in Organ Performance from the Peabody Conservatory of John’s Hopkins University. He is now pursuing the Doctor of Musical Arts at Peabody, where he holds the coveted Dean’s Fellowship. Jordan’s teachers have included John Walker, Andrew Scanlon, and Christopher Jacobson. Additionally, he has studied in Paris with Madame Marie-Louise Langlais.

As a solo recitalist, Jordan performs extensively across the United States. As an ensemble musician, he has performed under the batons of Marin Alsop, Nicholas McGegan, and Anthony Blake Clark. In 2018, he earned first prize in the 16th International Organ Competition at West Chester University and in 2019 he was named one of Diapason magazine’s ’20 Under 30.’ Jordan holds the Associateship diploma from the AGO and currently serves on the National Nominating Committee and the National Board of AGO Young Organists.