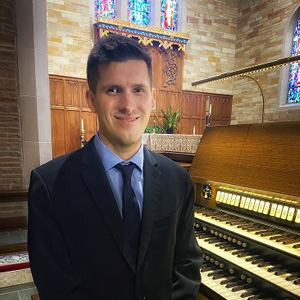 A graduate of The Juilliard School (MM) and Westminster Choir College (BM), he studied organ with Paul Jacobs, Ken Cowan, and Diane Belcher. He is Chair of Planned Giving for the Association of Anglican Musicians, is Dean of the Tulsa Chapter of the American Guild of Organists, and is Chair of Fundraising for the Dallas Boys Course of the Royal School of Church Music-America. He has served as adjunct instructor of harpsichord and early music at Oklahoma City University and the University of Central Oklahoma.

In 2022, he and Adam Pajan will perform the twelve major organ works of César Franck in a tour including performances in Houston, Dallas, New York, Seattle, and Tulsa. In 2023, Mr. Arndt, Dr. Pajan and the St. John’s Chamber Choir will offer the complete 20 canticle settings of Herbert Howells in a special Choral Evensong series.