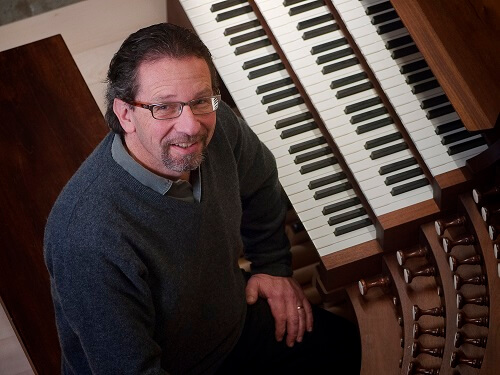 Michael Kraft, President of C.B. Fisk organbuilders. Michael also serves as Senior Reed Voicer, designing and overseeing the construction and voicing of the reeds. Since joining the Fisk shop in 1986, research trips to England, France and Germany have given him the opportunity to hear, play and measure many historic organs, a significant influence on his conceptualizing and voicing of the reed pipes in more than 60 Fisk instruments.  Michael earned his Bachelor of Music degree in organ performance from the Oberlin Conservatory of Music and his Master of Music degree from the New England Conservatory of Music, where he was an organ student of Yuko Hayashi. He has performed at home and abroad on many noteworthy instruments including Fisk Opus 139 at Harvard University and Opus 55 at Old West Church in Boston. Michael was the Music Director at the Dover Church, home of Opus 107, for 24 years before becoming the Music Director and Organist at First Church (UU) in Salem, MA. He and his wife, Stacia Conklin Kraft, a singer, preservationist and activist, live in Salem where they have raised three children and continue to restore their 1794 home.