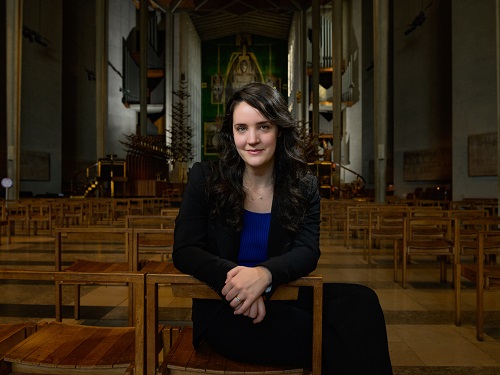 Rachel was Organ Scholar at St Paul’s Cathedral in London, England from 2014-2016, and made history as the first female organist on staff in its 1400-year history. As one of the staff organists, she gave recitals and regularly played and conducted for services, working with the world-famous Cathedral Choir in the daily cycle of worship as well as services of National significance.

She combines life as a Cathedral musician with a busy international recital schedule, touring as soloist and as part of Organized Crime Duo. Recent engagements include the Royal Canadian College of Organists’ National Convention 2016 & 2021; Orgelsommer Festivals 2016 & 2017, Lüneburg, Germany; The Toronto Bach Festival 2018; Haderslev Cathedral, Denmark; the Royal College of Organists Winter Conference 2021; and the Lichfield Festival 2021. . Rachel has appeared on radio as performer and presenter, most recently accompanying the BBC Singers in Choral Evensong and presenting Inside Music on BBC radio 3 and This Is My Music on CBC radio. Rachel’s debut solo album, featuring all Canadian music on the organ of Coventry Cathedral and supported by the Canada Council for the Arts, was released to excellent reviews – it received five stars in Choir and Organ Magazine and was Gramophone Magazine Editor’s Choice in March 2020.

For details of upcoming shows and other information, visit organizedcrimeduo.com and rachelmahon.ca.