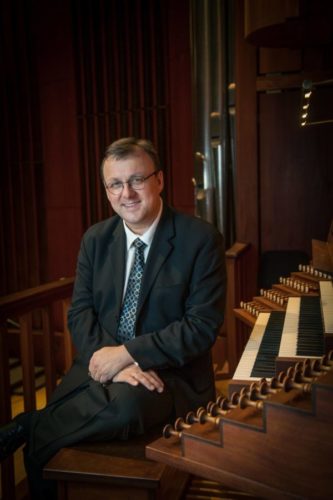 Stefan Engels was appointed professor of organ and Leah Fullinwider Centennial Chair in Music Performance at Southern Methodist University in Dallas, Texas, in 2014, where he is also head of the organ department at the Meadows School of the Arts.  The position is the first endowed Centennial Chair in Meadows, made possible by a gift from Sarah and Ross Perot, Jr., in honor of Sarah’s mother, Mrs. Leah Fullinwider.

Engels joined SMU from one of Europe’s oldest and most prestigious musical institutions, the University of Music and Performing Arts “Felix Mendelssohn Bartholdy” in Leipzig, Germany, where he had served as professor of organ from 2005 until 2015.  Prior to that he was associate professor of organ and chair of the organ department at Westminster Choir College in Princeton, NJ, from 1999 to 2005.

During his appointment in Leipzig, Engels shaped the university’s Organ and Church Music Institute into a center for organ performance and organ pedagogy of international acclaim.  He also founded and served as artistic director of the European Organ Academy Leipzig, which attracts faculty and students from around the world.  Furthermore, as an advocate and specialist for the music of the late-Romantic German composer Sigfrid Karg-Elert, he founded the Karg-Elert Festival in Leipzig, demonstrating and discovering the unique works of this Leipzig composer.

This recording project came to its completion in 2017 with 15 CDs, which have been reviewed to the highest international critical acclaim: “… this series will surely stand as the greatest project the gramophone has achieved in organ music for very many years …” (Choir & Organ); “… fantastic volumes of some of the most creative and complex organ music ever written has been released by Priory in this groundbreaking series of Karg-Elert’s complete organ works – much of it unrecorded … Engels has the measure of both music and instrument – there is much to marvel at here …” (prestoclassical.co.uk) “Engels is a player of exceptional talent and in his hands Karg-Elert receives as sympathetic an advocacy as one could ever imagine …” (International Record Guide) “Stefan Engels’ performance is superlative …” (Organists Review) “Engels delivers interpretations that may never be bettered … A magnificent disc.” (Gramophone)

Engels received his broad musical education in Germany and the United States.  He studied organ, piano, harpsichord, choral conducting and church music at universities in Aachen, Düsseldorf and Cologne.  From 1993 until 1998 he pursued further organ studies with Wolfgang Rübsam in Chicago and the late Robert Anderson in Dallas, receiving an Artist Certificate degree from SMU Meadows in 1995.  He achieved his international breakthrough when he was awarded the “Concerto Gold Medal” at the 1998 Calgary International Organ Competition.  Since then he has been represented by Karen McFarlane Artists Inc. of Cleveland, Ohio.