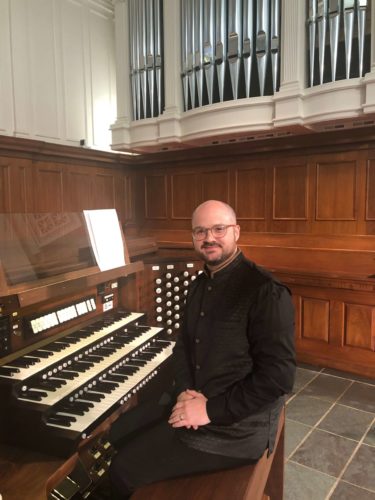 Vincent Carr currently serves as National Councillor for Education for the American Guild of Organists, the world’s largest professional organization of organists and church musicians. He also serves as Director of Sacred Music at the parish of Our Lady of the Lake in Verona, New Jersey. From concert hall to church, he has championed new music and the works of underrepresented composers in diverse and engaging concert programs.

An experienced university professor for more than a decade, he most recently served as Associate Professor of Organ and Church Music in the prestigious Jacobs School of Music at Indiana University (Bloomington). He also served on the faculties of Montclair State University and William Paterson University. As a professional organist, he has held organist and choirmaster posts at some of the nation’s most noteworthy churches and cathedrals. From 2006-2013, he was Associate Organist at the Cathedral Basilica of the Sacred Heart in Newark, New Jersey, where he founded the Wednesdays at Noon concert series as a mission to the city of Newark. In his subsequent post at the Cathedral of the Incarnation in Garden City, New York, a commercial recording entitled “A Year at Incarnation” was released featuring the cathedral’s renowned music ministry. He holds the Associate and Choirmaster certifications from the AGO. More information may be found at www.vincecarr.com