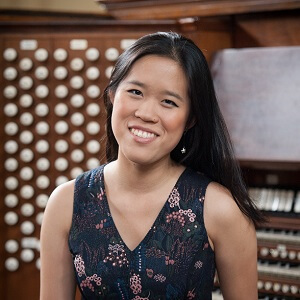 A native of Alexandria, Virginia, Janet holds degrees from the Yale School of Music and Institute of Sacred Music – MMA ‘18, MM ‘17, and The Juilliard School – BM ‘15. While at Yale, she was appointed Organ Scholar at Christ Church, New Haven and Trinity on the Green, and Director of Music for Berkeley Divinity School. Janet’s former teachers include Thomas Murray, Paul Jacobs, John Walker, Wayne Earnest, and Victoria Shields.

Janet co-founded ‘Amplify Female Composers’ in 2020 and contributes research to the sacred music database ‘A Great Host of Composers.’ She has taught at POEs, played as course organist for RSCM America, and served on the AGO OrganFest 2020 and 2021 National Steering Committees. Janet is an executive board member of the NYCAGO and member of the Association of Anglican Musicians. www.janetyieh.com.