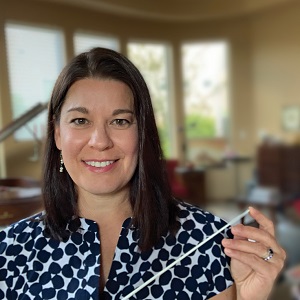 The versatile, engaging, and spirited Canadian-American conductor, organist, and educator Maxine Thévenot is driven by a passion for vocal and organ music in all its forms and styles and is equally at home with repertoire from the classical canon and more contemporary compositions.

A frequent champion of the music of our own time, she has conducted regional, national, and world premieres of works by many living composers from across the globe. In 2022 Thévenot will premiere newly-commissioned works by Sarah Quartel and Jenny Olivia Johnson, written especially for her choral ensembles.

Internationally and nationally, Maxine has led her exceptional choirs in concerts and liturgical services in prestigious venues including Westminster Abbey and St. Paul’s Cathedral, London; Washington National Cathedral; and the Cathedral of St. John the Divine, NYC. Her career as a concert organist has afforded her the opportunity to perform throughout North America, the UK, France, Germany, Italy, Hungary, Austria, and in 2022 she will make her début recital performance at the Hallgrimskirkja in Reykjavik, Iceland. Recognized for her excellence as a recording artist, Maxine has released 16 critically acclaimed commercial recordings on the RavenCD label.  In her spare time, she enjoys scuba diving, hiking, walking, and baking.