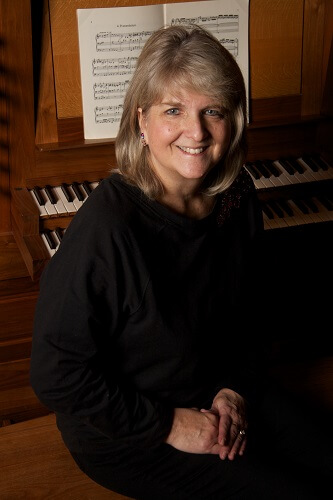 Norma Aamodt-Nelson (1951-2020) was one of the early proponents for holding the 2022 AGO Convention in Seattle and was chair of the New Music Committee until she had to step back from that role due to her cancer diagnosis. We are so grateful for her vision and contributions and wish to honor her pivotal role in the early days of planning. One of the commissioned pieces — “Nada me falta” by Mark Sedio — was written especially to honor her memory and will receive its world premiere during the Hymn Festival held at Bellevue Presbyterian on July 6.

Norma Aamodt-Nelson of Seattle died on April 29, 2020 at home from complications of multiple-myeloma. She was born in Silverton, Oregon to Henry and Viola Aamodt and grew up on a dairy farm in Hubbard with brothers Doug and Steve. Norma attended Pacific Lutheran University in Tacoma, receiving a Bachelor of Arts degree. While a student at PLU Norma met Steve Nelson and they were married in 1974. They moved to the Midwest to continue their education and develop careers while living in Minnesota, Iowa, and Illinois. They were colleagues in their work in the Lutheran Church, Steve as pastor and Norma as musician and organist. While in Illinois their daughter, Rachel, was born. Norma’s career as a musician in the church was remarkable. She has left an important legacy of music in the church and her work continues on in the lives of the hundreds she has influenced through her ministry. In 1993, Norma became the Acquisitions Editor for instrumental and worship music resources for Augsburg Fortress Publications. In 2001 the family moved to the Seattle area after Norma accepted the Minister of Music position at Trinity Lutheran Church in Lynnwood, a position she held until her death. Norma created a multi-faceted lay-led instrumental and choral music program and served as organist. In 2011 Norma earned the Doctorate of Sacred Music degree from Oxford University. Norma served in many leadership roles for the Association of Lutheran Church Musicians (ALCM) and for the American Guild of Organists (AGO), including the position of Dean of the Seattle AGO Chapter. Norma was preceded in death by her husband, Rev. Steven G. Nelson, in 2016 and both of her parents in earlier years. She is survived by daughter, Rachel (Mike Stewart), grandson Isaac Nelson Stewart, brothers Doug Aamodt (Amy), Steve Aamodt (Linda), sister-in-law Jan Nelson (Stan Andrist), an uncle, Lars Aamodt (Elaine), as well as a host of godchildren, nephews, nieces, cousins, and dear friends.