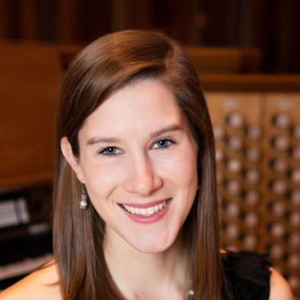 Originally from Greenville, SC, Dr. Caroline Robinson is an active performing organist and church musician. Dr. Robinson holds the post of Organist and Associate-Choirmaster at the Cathedral of St. Philip in Atlanta, where she shares organ playing and accompanying responsibilities and leads the RSCM-based Chorister program.

Caroline has been featured as a solo recitalist in many venues across the United States, including New York City churches St. Thomas Fifth Avenue, St. John the Divine, Trinity Church Wall Street, and St. Patrick’s Cathedral; Church of the Advent in Boston, MA and Harvard Memorial Church, Cambridge; and Kansas City’s the Kauffman Center. Her playing has been broadcast on American Public Media’s “Pipedreams”, “Pipedreams LIVE!”, and Philadelphia-based public radio station 90.1 WRTI’s Wanamaker Organ Hour. She has been a featured performer at AGO and OHS Conventions.

Caroline is the Second Prize Winner of the National Young Artists Competition in Organ Performance (NYACOP), held as part of the 2018 AGO Convention in Kansas City. Caroline holds First Prize from the 11th annual Albert Schweitzer Organ Festival (2008) and from the 10th annual West Chester University Organ Competition (2010). She was a semifinalist in the 2014 Dublin International Organ Competition.

Dr. Robinson completed her undergraduate work at the Curtis Institute of Music, where she studied with Alan Morrison. Aided by a grant from the J. William Fulbright fellowship fund, Caroline studied at the Conservatoire à Rayonnement Régional de Toulouse with Michel Bouvard and Jan Willem Jansen (organ) and Yasuko Bouvard (harpsichord). Caroline holds the Doctor of Musical Arts as well as the Master of Music in Organ Performance and Literature from the Eastman School of Music, where she studied with David Higgs. At the conclusion of her doctorate, Dr. Robinson received the Performer’s Certificate and Advanced Teaching Certificate in Theory Pedagogy.