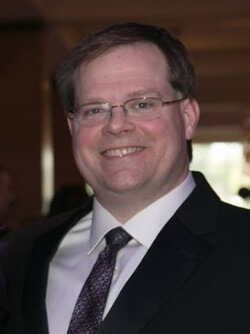 Bryant Wilkie currently is the handbell director at Saint Andrew’s Lutheran Church in Bellevue, WA.  He has also had a ten-year-plus stint with the Bells of the Sound, still rings with them on occasion, and is an Associate Member.  Additionally, he has rung with the Pacific Image Ringers in Mount Vernon, WA.  His ringing career began at Edmonds United Methodist Church in Edmonds, WA 40 years ago under the direction of Dick Kite.  Working his way through all the handbell groups he eventually took over the directorship of the adult group at Edmonds United Methodist beginning his directing career.