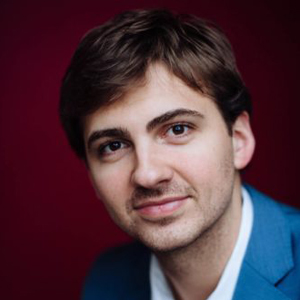 Colin MacKnight, called “a stunning player of exceptional ability” by composer and conductor Bob Chilcott, is Director of Music at Trinity Episcopal Cathedral in Little Rock, Arkansas. At Trinity, he oversees a music program which includes among its offerings weekly choral evensong, a concert series, and a chorister program. Prior to Trinity, Colin was Associate Organist at Cathedral of the Incarnation in Garden City, Long Island; Assistant Organist and Music Theory Teacher at St. Thomas Fifth Avenue; and Assistant Organist at Church of the Resurrection, NYC.

Colin holds the Fellow and Choirmaster Certifications from the AGO, receiving the prize for top Choirmaster score, and was one of The Diapason’s “20 Under 30” in 2019. For more information, media, and a calendar of performances, please visit colinmacknight.com.