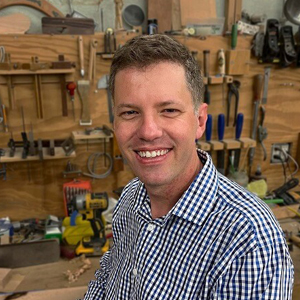 A second-generation pipe organ builder, David Brown has been living and breathing this ancient trade since childhood days in his father’s factory, seeing, hearing, and smelling all that goes into the art of organbuilding. A native of Sydney, Dave began his indentured 4 year apprenticeship in Melbourne with Australian Pipe Organs in June 2000, concurrently completing a 3 year Cabinetmaking technical course.

In 2005, Dave took up the position as Service Shop Foreman for Buzard Organ Company in Champaign, Illinois, and has overseen the restoration and rebuilding of dozens of instruments with his team there, as well as an involvement in new instruments by the firm.

A self-confessed Anglophile, Dave has a great fondness for English organs of the Victorian and Edwardian eras, having restored and maintained dozens of these instruments imported into Australia from the great firms of Hill &Son, T.C. Lewis, and Willis & Sons, and other firms. He maintains personal and professional connections to the organ worlds of England and Australia and is passionate about saving, restoring, and re-homing fine redundant instruments.

Dave’s 22 years in the trade have given him the opportunity to work on a wide variety of instruments such as those built by, Willis, Rieger, Wurlitzer, Skinner, Walcker, Hill, and many others.

When he’s not organbuilding, Dave loves to travel and in fine weather may be spotted around town driving his 1965 Lincoln Continental convertible.