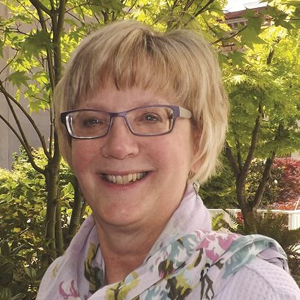 Wanda Griffiths has enjoyed an extensive career as an organist, conductor, and
educator. Besides solo concerts, Dr. Griffiths has performed together with Dr. Stephen
Marshall-Ward as a duo-organ team, presenting music for four hands/four feet in concerts
along the west coast. She has taught at Cal State Los Angeles, Eureka College (Illinois),
University of Washington, Trinity Lutheran College (Everett) and Concordia University,
Portland. She has served as music director and organist for UCC, Presbyterian, Disciples
of Christ, Methodist, Lutheran, and Adventist congregations. She has been a program
annotator for the Organ Recital Series sponsored by the Seattle Symphony and is a Past
Dean of the Seattle Chapter of the American Guild of Organists. She has led or co-led
many workshops on Worship and Music and on Worship and the Arts. Dr. Griffiths holds
a Bachelors degree in Music Education and Organ Performance from Bethany College,
Lindsborg, Kansas, a Masters Degree in Organ Performance from USC, and a Ph.D. in
Musicology from Claremont Graduate University, where she focused on the tragédie
lyrique (French Baroque Opera). Her dissertation work resulted in the creation of an
edition (A-R Editions) of Elizabeth Jacquet de La Guerre’s opera Céphale et Procris, the
first opera by a woman performed at the Paris Opéra. She is presently Director of Music
and Organist at Plymouth Church UCC in Seattle and is also Minister of Music at the
Green Lake Church of Seventh-day Adventists.