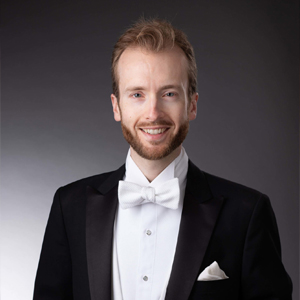 William C. White is a composer, conductor, teacher, writer, and performer based in Seattle, WA. Equally known for his original music as for his bold interpretations, Mr. White is an innovative programmer and conscientious leader in the musical community.

Mr. White currently serves as music director of Harmonia (Seattle), a unique performing ensemble comprised of a chorus and orchestra that concertize as one. For four seasons, he served as Assistant Conductor of the Cincinnati Symphony Orchestra. A noted pedagogue, he has led some of the nation’s finest youth orchestra programs, including Portland’s Metropolitan Youth Symphony and the Cincinnati Symphony Youth Orchestra.

Mr. White maintains a significant career as a composer of music for the concert stage, theater, cinema, church, radio, and film. His music has been performed throughout North America as well as in Asia and Europe. His output includes a symphony, an oratorio, chamber music of all varieties, and several works intended for young audiences. His music has been recorded on the MSR Classics, Navona, and Cedille Record labels.

Mr. White earned a BA in Music from the University of Chicago and a masters degree in Conducting from Indiana University’s Jacobs School of Music. He originally hails from Bethesda, MD, where he began his musical training as a violist. He is a staff singer (tenor) in the choir of Epiphany Parish, and has worked as a church musician throughout his career, including at Portland’s Trinity Cathedral (OR), the Union Church of Hinsdale (IL) and the Presbyterian Church of Barrington (IL).

He is co-host of The Classical Gabfest, a podcast about the world of classical music.

Recordings of his works can be heard at his web site, www.willcwhite.com, where he also maintains a blog and publishing business.